The ClareOne Carbon Monoxide Detector (CLR-C1- CO) is a battery powered carbon monoxide detector and alarm device. This device is designed to protect you and your household from the dangerous effects of Carbon Monoxide.

To activate/turn on the CO detector:

Many people are killed each year, and many more suffer ill health from Carbon Monoxide (CO) poisoning. CO is an invisible, odorless, tasteless and extremely toxic gas. It is produced by appliances and vehicles burning fuels, such as coal, oil, natural gas, propane, kerosene, paraffin, wood, gasoline, diesel, charcoal, etc. CO is absorbed by red blood cells in the lungs in preference to oxygen - this results in rapid damage to the heart and brain from oxygen starvation.

High levels of CO in a house can be caused by:

What happens when the CO alarm detects Carbon Monoxide?

The following symptoms may be related to Carbon Monoxide poisoning and should be discussed with all members of the household:

Many cases of reported Carbon Monoxide poisoning indicate that while victims are aware, they are not well. They become disoriented and are unable to save themselves by either exiting the building or calling for assistance.

*Unless it has alarmed previously, ppm values shown in the table are for example purposes only. See “CO alarm memory”.

When the alarm detects CO the red LED flashes in accordance with Table 2. This helps locate CO leaks as the unit gives an immediate indication. (Without this feature the CO would need to be present for typically 90 minutes for an alarm sound to be given).

Note: The red LED flashes may be triggered by CO produced by gas appliances, from car engines or from nearby barbecues. This is usually not a concern, unless the red LED flashes persist until the alarm sounds and the CO source is unknown.

The display models display CO concentrations greater than 30ppm in accordance with Table 2.

Note: The CO alarm may sound if cigarette smoke is blown into it or if aerosols are released nearby.

The CO alarm memory is an important feature of the CO alarm. If the house is unoccupied during an alarm condition, it warns the homeowner that the unit has previously detected CO gas and been in alarm. The memory feature has two operation modes:

24-hour memory indicators: After alarm, the red LED flashes at different rates every 50 seconds depending on the level of CO detected - see Table 3.

Memory recall on demand: To review the memory status after initial 24 hours, press and hold the Test button, the red LED flashes in accordance to Table 3. Display models show the peak level of CO measured.

Reset Memory: Hold down the Test button until the red LED stops and the green LED starts flashing. Cover the Alarm with a cloth to muffle the sounder during this time.

Note: The memory is reset when the unit is switched off.

For your information the National Fire Protection Association’s Standard 720 advises as follows:

Carbon Monoxide Alarms shall be installed as follows:

Note: Specific requirements for Carbon Monoxide alarm installation vary from state to state and from region to region. Check with your local Fire Department for current requirements in your area.

Figure 1: Location of CO alarm in a room with a fuel burning appliance

Figure 2: CO alarm in a room with sloped ceilings

Note: The CO Alarm should be located at the high side of the room.

Figure 3: CO alarm in bedrooms and other rooms away from appliances (i.e. at breathing level) 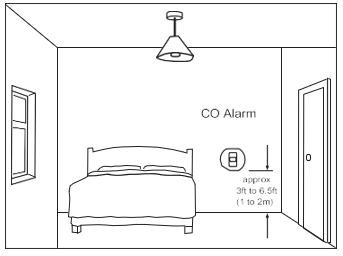 Do not place the CO alarm in any of the following areas.

WARNING: A CO Alarm should not be used as a substitute for proper installation, use and maintenance of fuel-burning appliances, including appropriate ventilation and exhaust systems.

WARNING: Your CO alarm is intended for use in ordinary indoor locations of family units. It is not designed to measure compliance with OSHA commercial or industrial standards.

To add the sensor to your panel and for detailed programming instructions, refer to the ClareOne Wireless Security and Smart Home Panel User Manual (DOC ID 1871).

To add the alarm:

WARNING: The Installation of this apparatus should not be used as a substitute for proper installation, use and maintenance of fuel burning appliances including appropriate ventilation and exhaust systems.

To install the CO alarm:

To tamperproof the alarm:

Test the system frequently to ensure its continued and safe operation.

To test the detector: Press and hold the Test button.

The green LED flashes and the sounder ramps up to full sound, indicating that the detector is operating correctly.

When the alarm sounds, after sensing CO, pressing the Test/Hush button immediately silences the alarm (the red LED continues to flash). If CO is still present the red LED and sounder activate again after 4 minutes. The alarm can only be silenced once during a CO incident. At levels > 250 ppm CO the alarm cannot be silenced.

The CO alarm self-checks (monitors) itself and give a status update every 50 seconds if there are any problems.

The status of the alarm can also be checked on demand by using the test button. Table 4 shows the status response to both the self-check and on demand testing.

Note: If the alarms indicate a fault, pressing the Test button silences the beeps for a 24-hour period. This is for your convenience and can only be done once.

Clean the outside housing by occasionally wiping with a clean damp cloth. Do not use any cleaning agents, bleaches, detergents, or polishes including those in aerosol cans. Avoid spraying air fresheners, hair spray, paint, or other aerosols near the CO alarm. Do not place air fresheners near the unit.

Use the narrow nozzle of a vacuum cleaner to remove dust and other contamination from the cover slots and gas entry holes.

CAUTION:Do not paint the CO alarm.

Remove the CO alarm when decorating. Do not allow water or dust to contaminate the alarm.

WARNING: Do not open or tamper with the CO alarm. There are no user serviceable parts inside, and this can damage the alarm.

If the alarm indicates a yellow flash with a single beep or the low battery icon is displayed on the LCD display, the battery needs attention.

To replace the battery:

WARNING: Constant exposures to high/low temperatures or high humidity reduces battery life. Use only batteries specified in marking. Use of a different battery may have a detrimental effect on alarm operation.

For environmentally sound disposal, remove the alarm from its mounting plate models, open the battery door and remove the batteries) and dispose in accordance with best practice and guidance on WEEE disposal and recycling.

The Carbon Monoxide alarm checks for CO gas every 4 seconds. When exposed to the CO gas, the red LED flashes (as per Table 2) to confirm that it is detecting the CO gas. Solo C6 brand canned CO testing agent may be used to verify the alarm’s ability to sense CO.

To gas test the CO detector: Spray canned CO within .25 in of the gas entry holes for 3 seconds.

Within seconds, the red LED begins to flash (as per Table 2) confirming that the alarm has detected the CO.

The alarm will sound 2 x 4 temporal tone patterns to indicate an alarm condition.

To return the unit to standby:

Place the alarm in clean air for a few minutes until the red LED is no longer flashing.

When the alarm sounds

WARNING: Actuation of your CO alarm indicates the presence of carbon monoxide (CO) which can cause death.

When the alarm sounds:

Follow these guidelines to reduce the risk of Carbon Monoxide poisoning.

If your CO alarm fails to work after you have carefully read all the instructions, verified that the unit has been installed correctly, and ensured that it has good batteries connected, return it for repair or replacement from the original purchasing location.

Some states or jurisdictions do not allow the limitation or exclusion of incidental or consequential damages, or limitations on how long an implied warranty last so the above limitation may not apply to you.

Do not interfere with the alarm or attempt to tamper with it. This will invalidate the guarantee, but more importantly may expose the user to shock or fire hazards. This guarantee is in addition to your statutory rights as a consumer.

Carbon Monoxide must enter the unit for it to be detected. There may be Carbon Monoxide in other areas of the house (e.g. downstairs, in a closed room, etc.) but not in the vicinity of the CO alarm. Doors, air drafts and obstructions can prevent CO from reaching the alarm. For these reasons we recommend CO alarms are installed both near and in bedrooms, particularly if bedroom doors are closed at night. Additionally, install detectors in rooms where members of the household spend much of their time, and in rooms with potential sources of CO gas.

The CO alarm may not be heard. The sound output is loud but it may not be heard behind a closed door or if it is too far away. The alarm may not wake up someone who is impaired by alcohol or medications. The alarm sound may be masked by other sounds such as T.V., stereo, traffic noise etc. Installing CO alarms on either side of closed doors will improve their chance of being heard. This CO alarm is not designed for people with impaired hearing.

CO alarms don’t last indefinitely. CO alarms are sophisticated electronic devices with many parts. Although CO alarms and their component parts have undergone stringent testing, and are designed to be very reliable, it is possible that parts can fail. Therefore, you should test your CO alarms weekly. CO Alarms must be replaced after 10 years of operation.

CO alarms are not a substitute for life insurance. Householders are responsible for their own insurance. CO alarms warn of increasing CO levels, but we do not guarantee that this will protect everyone from CO poisoning.

CO alarms do not detect the presence of natural gas (methane), propane, butane, or other combustible gases. Install combustible gas alarms to detect such gases.

Note: Carbon Monoxide alarms, with electrochemical sensors have a cross sensitivity to hydrogen. This means that they can alarm due to sensing hydrogen produced by batteries which are incorrectly charged, such as on boats or with battery back-up systems such as those used with alternative energy systems. The unit will alarm with 500ppm H2 after between 10- and 40-minutes exposure.

This CO alarm is intended for residential use. It is not intended for the use in industrial applications where OSHA requirements for carbon monoxide detectors must be met.

WARNING: THIS CO ALARM IS DESIGNED TO PROTECT INDIVIDUALS FROM THE ACUTE EFFECTS OF CARBON MONOXIDE EXPOSURE. IT WILL NOT FULLY SAFEGUARD INDIVIDUALS WITH SPECIFIC MEDICAL CONDITIONS. IF IN DOUBT CONSULT A MEDICAL PRACTITIONER.

The alarm does not work with the test button

Alarm sounds for no reason

See When the alarm sounds.

If there are still problems:

If the unit continues to sound it is possibly defective and should be replaced.