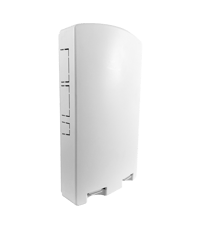 The ClareOne 16 Zone Hardwired Input Module (HWIM) allows the takeover of hardwired security zones making them compatible with the ClareOne panel. The HWIM has
16 wired zone inputs each with LED status, a tamper switch input, a back-up battery charging terminal, and 2 auxiliary power outputs for powered sensors, capable of outputting 500mA @ 12VDC. The HWIM supports powered and unpowered sensors, including contact zones (open/close), motion sensors, and glass break detectors. Input zones 1 and 2 have an optional 2-minute communication time delay which can be enabled to prevent repeated signals from motion sensors being sent to the panel.

Once all sensors are wired to the HWIM, the HWIM and each zone can be paired to the ClareOne panel. Follow the steps in this installation sheet for HWIM and sensor connection to the panel.

Use the included screws for installation. The included antennas should be used regardless of location, for optimal RF communication.

Note: If the HWIM is being installed in a metal container or equipment rack, the antennas must extend outside the container to ensure that the RF communication is not interrupted. Do not bend or alter the antennas.

The following instructions step through pairing the HWIM to the ClareOne panel.

Note: The CLR-C1-WD16 hardwired input HWIM must be paired with the ClareOne panel to ensure proper system operation.

The following section details the HWIM’s buttons and LEDs.

To clear the memory:

To enable communication timer delay on zones 1 or 2:

To disable communication timer delay on zones 1 or 2:

With a sensor in its active state (i.e. door/window contact separated from its magnet), take a multimeter set to measure resistance and connect the multimeter across the zone wires. If the multimeter reads a value of 10 kΩ or less, the sensor is N/O. If the multimeter reads an open or extremely high resistance (1 MΩ or higher) then the sensor is N/C. The table below provides guidance for using the measurements to determine the EOL resistance value, as well as the line resistance for N/O sensors. This is the case regardless of the number of sensors connected to a single zone, so long as all sensors on the same zone are in series or in parallel with one another.

Note: When wiring a sensor that also has a tamper output, the alarm output and tamper output should be wired in series so that the zone will trigger on either a motion or tamper event.