To the maximum extent permitted by applicable law, in no event will Clare Controls, LLC. be liable for any lost profits or business opportunities, loss of use, business interruption, loss of data, or any other indirect, special, incidental, or consequential damages under any theory of liability, whether based in contract, tort, negligence, product liability, or otherwise. Because some jurisdictions do not allow the exclusion or limitation of liability for consequential or incidental damages the preceding limitation may not apply to you. In any event the total liability of Clare Controls, LLC. shall not exceed the purchase price of the product. The foregoing limitation will apply to the maximum extent permitted by applicable law, regardless of whether Clare Controls, LLC. has been advised of the possibility of such damages and regardless of whether any remedy fails of its essential purpose.

Installation in accordance with this manual, applicable codes, and the instructions of the authority having jurisdiction is mandatory.

While every precaution has been taken during the preparation of this manual to ensure the accuracy of its contents, Clare Controls, LLC. assumes no responsibility for errors or omissions.

Note: Ensure all accessories are included. If not, contact your dealer. 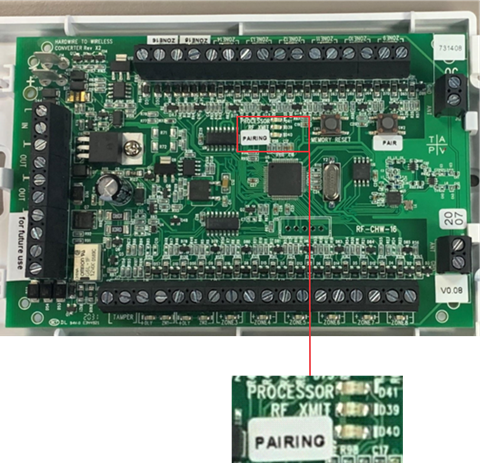 Only qualified installation technicians should install the HWIM. Clare Controls does not assume responsibility for damages caused by improper installation or use of the device. The HWIM is intended to be mounted to a wall using the included screws and anchors. The HWIM should be oriented with its antennas facing upward. The included antennas should be used regardless of location, for optimal RF communication. Once all sensors are wired to the HWIM, the HWIM and each zone can be paired to the ClareOne panel.

Note: If the HWIM is being installed in a metal container or equipment rack, the antennas must extend outside the container to ensure that the RF communication is not interrupted. Do not bend or alter the antennas

With a sensor in its active state (i.e. door/window contact separated from its magnet), take a multimeter set to measure resistance and connect the multimeter across the zone wires. If the multimeter reads a value of 10 kΩ or less, the sensor is N/O. If the multimeter reads an open or extremely high resistance
(1 MΩ or higher) then the sensor is N/C. The table below provides guidance for using the measurements to determine the EOL resistance value, as well as the line resistance for N/O sensors. This is the case regardless of the number of sensors connected to a single zone, so long as all sensors on the same zone are in series or in parallel with one another.

There are two portions of programming involved with the HWIM: adding the HWIM to the panel and pairing zones. 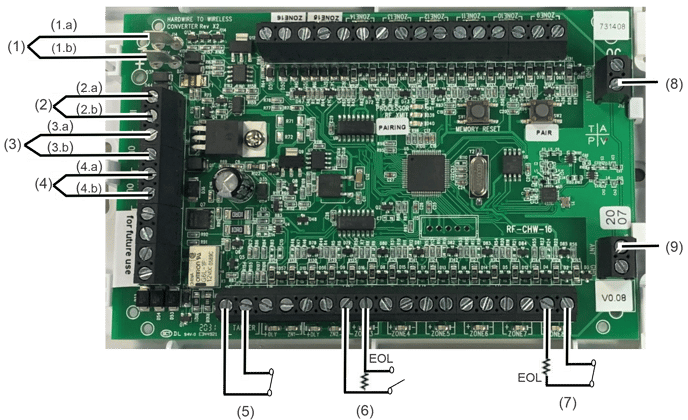 Note: When wiring a sensor that also has a tamper output, the alarm output and tamper output should be wired in series so that the zone triggers on either an alarm or tamper event. See figure below.

This section describes several areas of reference information that can be useful when installing, monitoring, and troubleshooting an HWIM.

The ClareOne panel reports the status of the HWIM as Ready by default. Additional HWIM states that may be indicated.

Ready: The HWIM is active and is working properly.

Tampered: The tamper input on the HWIM is open.

Troubled: The HWIM is offline, and nothing has been reported to the panel for 4 hours. At this point, for a monitored system the central station has been informed that the HWIM is offline. Typically, this is either due to power for the HWIM being removed or an object being placed between the panel and the HWIM blocking the RF communication path. Glass, mirrors, and appliances are the most common household items that cause interference.

Low Battery: The low battery indicator is only visible if the Battery Supervision setting is enabled for the HWIM, and the HWIM is either not connected to a battery, or the battery it is connected to is not adequate/low on charge.

The purpose of EOL resistors is two-fold: 1) to provide an additional layer of security for wired sensors, 2) to check if there is an issue with the wiring going to the sensor.

Without an EOR resistor, someone could short the terminals at the module to make the zone appear to always be closed regardless of activity at the sensor. Since the HWIM requires an EOL resistor, someone cannot short the zone input on the module, as it would cause the module to report the zone in a tampered state. Therefore, it is important for the EOL resistors to be placed as close to the sensor as possible. The further away the EOL resistor from the module, the more wiring can be monitored for unintentional shorts.

Note: If there is a short in the cable between the HWIM and the EOL resistor the HWIM reports the zone as being in a tampered state.

If the wrong value EOL resistor is used or the EOL resistor is installed incorrectly, the zone will not function properly. This can lead to things such as the zone status being reversed (i.e. reporting open when closed and closed when open). It could also lead to the zone reporting a tampered state or being stuck in a Not Ready state to the ClareOne panel.

Multiple sensors on a zone

Multiple powered sensors on one zone

For multiple powered sensors on the same zone, the sensors should be wired to the zone as shown in Figures 6 and 7, based on sensors being N/O or N/C. The EOL resistor should be placed at the sensor furthest away from the panel. The power wiring should be run to one sensor and then a second run of wiring should go from the first sensor to the second. Alternatively, the power wiring could go directly from each sensor back to the panel; this requires longer cable runs.

Note: The power connections should be in parallel for each sensor.

For multiple powered sensors on different zones, the sensors should be wired to the zones independently. The power wiring should go directly from the AUX output on the panel to each sensor.

There is a simple sequence of steps that can be taken to troubleshoot most issues that might arise when using the HWIM. The first step before proceeding with troubleshooting is to make sure that the issue is not network related. It is best to troubleshoot the HWIM using the ClareOne panel and not through the ClareHome application, ClareOne Auxiliary Touchpad, or FusionPro.